If you read our last instalment in the Women and Whisky series, you’ll know that women have a long and important history with our most precious of liquids. They invented the alembic still, they ran bootlegging operations and they repealed Prohibition. Many of them also burnt at the stake for selling whisky during the Middle Ages. And yet, despite all of this, whisky is still – by conventional wisdom – considered a drink for men. Why why is whisky considered a man’s drink?

There’s no logical reason for this.

According to research by Future Laboratory, 37 per cent of whisky customers in the US are female (as opposed to 15% in 1990), and almost a third of whisky drinkers in the UK are female.

Sure, that’s not quite a 50:50 split, but that’s a significant portion of whisky drinkers in both countries that are female.

And yet, when was the last time you saw an advert for whisky that wasn’t aimed at men?

Before we begin, a confession:

In the last instalment, we ran through the history of women and whisky. We spoke of Catherine Spears Frye Carpenter, Gertrude “Cleo” Lythgoe and Pauline Sabin and their enormous effect on the spirit and industry we love today.

But, we forgot somebody.

And not just a bootlegger or campaigner; somebody instrumental to the development of smoky, peaty single malts.

Ladies and Gentlemen, let us introduce you to Bessie Williamson.

Not only did Bessie protect the Laphroaig distillery on Islay during World War II – a feat that we’d all be incredibly grateful for on its own – but she went on to have the innovative idea of selling Laphroaig’s distinct, smoky, peaty whisky as a single malt rather than a blend.

Were it not for her, we’d never have known the medicinal, smoky wonders of Laphroaig single malt. And we certainly would never have had independent bottlings – like this Laphroaig 16 Year (Kingsman, 1999), aged in a rum cask – taking new twists on their smoky classic.

Bessie, we apologise. How could we forget you?

(ScotchWhisky.com have a great article about her, if you’d like to know about her incredible story. It’s well worth checking out.)

And now, back to the matter at hand:

Why is whisky considered a man’s drink?

Part One: A hangover of Prohibition-era morality

Do you remember in the last instalment when we mentioned that whisky became associated with prostitution? No? Let’s jog your memory on pre-Prohibition USA:

…it was during this period that whisky also became associated with extra-marital activities. At the time, brothels were legally allowed to sell whisky. After noticing that the sales of whisky significantly increased their profit margins, the prostitutes working in the brothels used to sell it to their clients. And not in small quantities, either.

As The Atlantic points out, ‘in New York City in the 1850s, for example, women made more than $2 million a year in liquor sales—close to the $3 million they were making for sex.’

After that, it didn’t take very long for the Temperance Movement to establish a clear link between alcohol and sin.

For them, whisky was one of the first steps towards sin – and it had to be stopped.

We all know the story of what happens next: Prohibition begins, nobody stops drinking, people drink more, Al Capone, Prohibition ends.

However, even after Prohibition had ended, that Temperance sensibility – the idea that women drinking in public and indecency were related – became ingrained in the American psyche.

In fact, in some states, women were banned from being in a bar unaccompanied until the middle of the 20th Century.

Prohibition might have been over, but – for many women – it was as if it never ended. There was a lot of moral and social judgement on women who drank.

And it wasn’t just in the bars that this misconception was taking effect, but in the distilleries too.

Spearheaded by an institutionalised fear of invoking the wrath of the Temperance Movement again, women were kept out of the distilling industry (at least publicly) for decades and decades. On top of the usual obstacles that women faced in the mid-century workplace, women in distilling also had to contend with odd superstitions: women couldn’t climb ladders in the distillery as it’d be indecent (apparently, trousers didn’t exist) and that women menstruating near the fermentation might affect the process or scent of the whisky.

With women not to be seen drinking alcohol in public or producing alcohol, it’s no surprise that whisky drinking and whisky production slowly became a domain of men.

But it wasn’t just Temperance-era values that led us to where we are today.

Far from it, in fact.

Advertising and marketing have played a large role in this perception too.

Part Two: ‘The men rode into the saloon’ is never followed by ‘and ordered a Merlot’, or the effect of gender stereotypes in drinks advertising

It doesn’t take an intimate knowledge or a degree in advertising to see the strategy at play when it comes to advertising whisky.

Just take a look at these adverts for whisky from the past century: 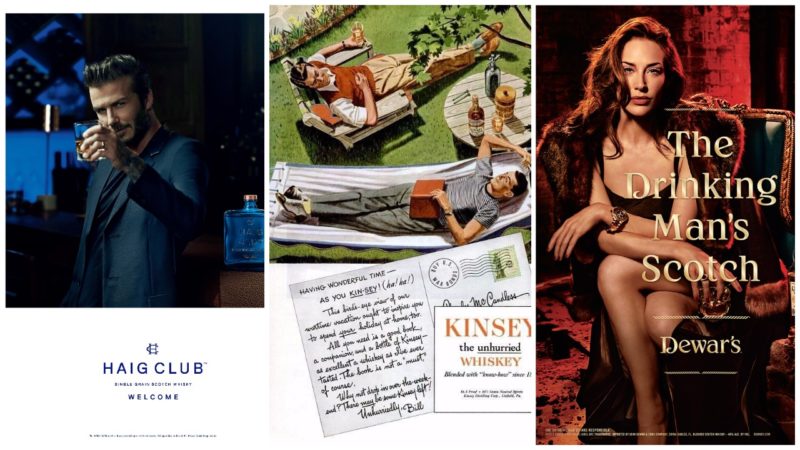 In general, there are three types of whisky advertising that date back over the course of the last century: the ‘man you want to be’ approach, the ‘man like you’ approach and the ‘if you drink whisky, this woman will find you attractive’ approach.

The ‘man you want to be’ approach involves using a famous man – usually a man associated with traditional ideas of masculinity (think the rags-to-riches success of David Beckham, the James Bond cool of Sean Connery or the ladies’ man image of George Clooney) – to promote a whisky.

The message is clear: drink the whisky I’m endorsing and you’ll be as cool/successful/handsome (or whatever traditionally masculine trait they choose) as I am. Subtle, right?

The second – the ‘man like you’ approach – is a little subtler. It relies on the idea of portraying a man very similar to the audience, but with a markedly better life. The message is clear and none-too-subtle: the only thing standing between you and this life is your choice of whisky.

The third and final approach – the ‘if you drink whisky, this woman will find you attractive’ strategy – is the least subtle of them all: at best, crass and cheap, at worst openly sexist and misogynist.

And these aren’t just adverts from the Mad Men era of advertising.

Sure, there are a few exceptions to these categories, but one thing unites almost any whisky advert: the underlying idea that whisky proves and asserts your masculinity (or creates a fraternal bond between men.)

Whisky – in the eyes of the advertiser and the consumer – has become the ultimate symbol of heteronormative, dominant, traditional masculinity.

Any other drink – aside from perhaps beer or dark spirits – is to be considered feminine.

The flip side: drinks advertising aimed at women

At the same time, the drinks industry began to target women with an equally gendered approach – namely, women’s drinks are light (usually related to calories), fruity and brightly coloured. Oh, and sickly sweet.

Even the spirits targeted at women – gin and vodka – are designed to be mixed (or, in other words, weakened).

Chocolate is often advertised as a guilty pleasure, something women should eat in secret, hilariously enough giving the candy both sexualization and shame. The food commercials aimed toward men, however, typically tell a different narrative. First off, they don’t push candy, they push meat. And men aren’t shown nibbling burgers in private, they’re shown chomping down on steaks or grilling proudly.

I’m afraid to say this line of marketing is more sinister than simply sweet equals weak. It’s also saying sweet equals weak and therefore equals female. This is an idea that’s played ad nauseum in American advertising and media. It must at least partially contribute to why sweetness in a drink is thought of as embarrassing. Perhaps this is why ordering a Margarita is more embarrassing than, say, a Manhattan.

It is also interesting that most, if not all of the drinks that are typically regarded as feminine are made from young, un-aged spirits like gin, vodka, and light rum. This further emphasizes my point that society has continued to suggest that feminine ideals are innocence, childhood, and youth… whereas for males aged spirits are indicative of wisdom and the character that age bestows upon men.

Or, to quote Ron Swanson:

Here it is. Behold the marvel that is Jack Daniel’s understanding of gender politics in the 21st Century:

That’s right folks, the only way to market whisky to women is to show women cooking and enjoying whisky at the same time.

Because, if a woman has to drink whisky, god forbid she leave the kitchen to do it, right?

Thankfully, the tide seems to be turning.

There’s Women Who Whisky, a club started by Julia Ritz Toffoli, to bring together women sick of hearing ‘Whoa, that’s a strong drink for a little lady! Sure you can handle it?’.

Then there’s the wealth of women working in the whisky industry around the world, each doing bold, innovative and exciting things. (More on these women of spirit  in the coming months.)

And, there’s also the 37% of women we mentioned at the beginning of the article that are ignoring traditional gender roles and choosing a drink that they like – rather than a drink they’re told by advertisers and society to like.

(And men, we hate to break it to you, but science might just be on the women’s side: a lot of whisky tasting is about the notes you get on the nose, and women are scientifically proven to be better at detecting smells.)

Here at Whisky Foundation, we think that it’s about time whisky started to be considered a drink for everyone.

Whisky is too good, too interesting and too exciting to confine itself to the perception that it is just for men.

That’s why we’ve made it our mission to make sure that whisky is enjoyed by everyone; not just the traditional male maltheads, but anybody else who wants to enjoy a dram, whether they’re a woman with a penchant for peat or a beginner looking to give whisky a try.