Many of us have fallen in love with The Macallan whisky for its sleek design, rich but subtle flavours, and all-round great taste. Yet, though we can tell you a lot about the maturation style and various designs, we perhaps don’t know as much about the history of The Macallan. I certainly didn’t!

So we thought we would take the opportunity to do a little research into the history of The Macallan and pass this information on to all of the other fans.

Let us begin our tale in the northerly wilds of Speyside, in the years previous to 1824. As many of us know, in the years previous to 1824 the hills, valleys, nooks and crannies around Aberdeenshire were full of steaming stills. The Farmers of these tumbling lands were distilling quite freely, creating exciting spirits for themselves and their community. Although at times these spirits were perhaps of rather questionable quality.

In 1823 the Excise Act was passed and in 1824 it was George Smith of the Glenlivet Distillery who first gave in and bought a distilling license. Shortly afterwards the other distilling farmers of the Highlands felt they had to follow suit.

Thus it came to be that Alexander Reid obtained for his farm a distilling license. Though not as fast off the mark as George Smith of Glenlivet, Mr Reid was pretty smart in obtaining his license, also obtaining it in 1824. The men would have risked not only their popularity with this move but also their lives. Other distilling farmers were not happy with the Excise Act and were hoping it could be repealed. If some distillers bought into the act and fully committed to a license then this made a repeal impossible. Thus their fellow distillers were pretty angry. In fact, they even say that George Smith had to carry two loaded pistols on him for the rest of his life.

Though The Macallan is a name that has become ubiquitous with good Scotch, it has not carried this same name across the years since 1824. The distillery was once re-named the R. Kemp Macallan-Glenlivet and even bore the slightly awkward name Elchies until 1980. It was in fact at the beginning of this deviant decade that The Macallan Single Malt brand was (re)introduced.

But what does The Macallan mean? Well the name was probably around before the distillery and can be broken down, by translating it from Scots Gaelic, into two parts. The ‘mac’ part may come from the Gaelic ‘Magh’ – this part has associations with land that is particularly arable and good for crops. ‘-allan’ may have been ‘-ellan’ which could be a derivative of ‘Fillian’ as St Fillian was an important monk in Scottish history. According to Undiscovered Scotland St Fillian roamed Scotland in the 8th century, establishing churches in Galloway and Islay before moving to a cave in Pittenweem to live as a hermit.

You could say then that the name ‘Macallan’ combines the earth with the heavens, the rustic with the divine. The whisky certainly tastes that way by being both rich but also light and easy going. 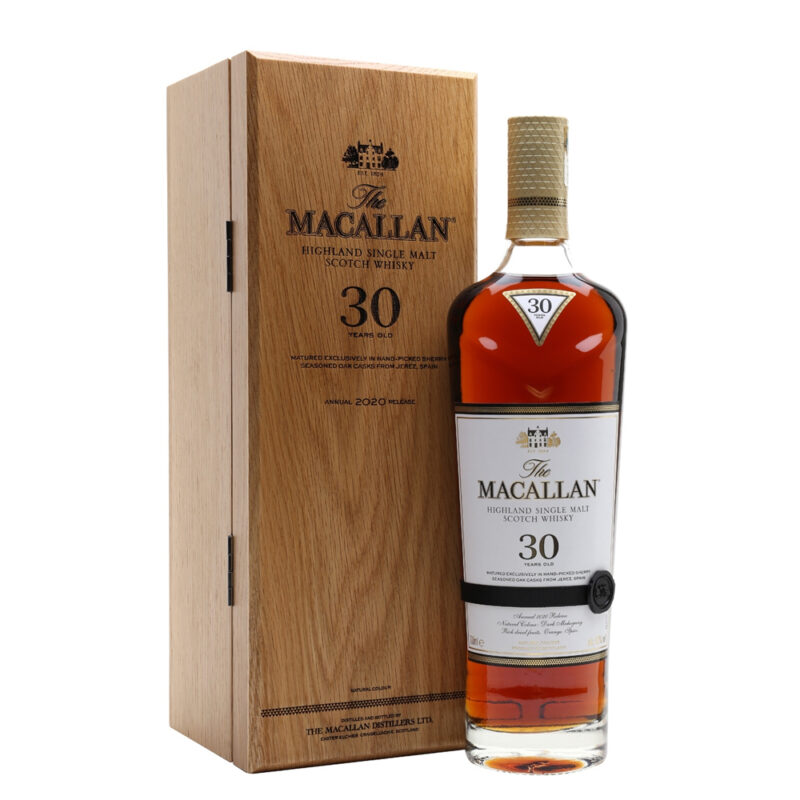 Lets bring it back to the 20th century. Up until the 1980s Macallan, under its various names, had devoted most of its resources to contributing high quality single malt into blended whiskies. Things changed in the 80s. From then on Macallan focused on producing single malt. To get an edge they invested in high quality wood from Spain. As I am sure many of you are aware, buying casks from the continent is a lot pricier than getting them from the U.S.. Ex-bourbon barrels are made far more regularly and as a result are a lot cheaper to buy.

However Macallan’s investment paid of as this maturation technique, combined with some artistic designs and well-timed marketing, helped them to gain a reputation for producing high quality single malt.

Of course, they almost lost this reputation during the 90s when the Fake Bottle Fiasco was at it’s height. But more on that in another blog!

Weegie whisky nerd working in the industry for over 5 years. Currently into: sherry bombs, sunny days and chocolate paired with whisky.