When whisky is taken out of a cask to be bottled, it typically sits at between 50-65% ABV (or lower, if it has aged for much longer). To make the drink more palatable, and to increase the number of bottles they can sell to consumers, bottlers will typically dilute their whisky down to reduce this alcoholic strength to a more standard level.

If you take a look at the ABV of any given whisky on your shelves, chances are it will sit at as low as 43 or even 40% – but more and more producers are releasing ‘cask strength’ whisky, which has not been diluted at all, often bottled at strengths as high as 65% ABV. But what’s so special about cask strength whisky?

For one thing, you can count on most cask strength whiskies to be unchillfiltered. Chill-filtration is a cosmetic process that most whiskies under 46% ABV go through to prevent them from going hazy, or ‘flocculating’ – this often happens in lower temperatures, or with the addition of water or ice in the glass. By cooling the whisky down to around 0°C and then passing it through a fine filter before bottling, the fatty acids, proteins and esters in the drink that cause this cloudiness are stripped out.

Many experts believe that the substances removed during chill-filtration are crucial to the final flavour of the whisky – for example in 2010, Burn Stewart Distillers (of Bunnahabhain, Tobermory and Ledaig) stopped chill-filtering all of their products when their head distiller realised, through blind tastings, that the process significantly muted their whiskies’ flavour and mouthfeel.

At 46%, however, this cloudiness doesn’t form, so chill-filtration is no longer necessary. This means that the vast majority of cask strength whiskies (barring some that have been aged for long enough to naturally fall below 46% in the cask) are unchillfiltered – giving you the fullest experience of your whisky.

The most special thing about cask strength whisky, however, is that it offers far more variety from one bottle than any standard strength whisky can. At a higher proof, the whisky will stand up to a lot more water, allowing you greater control over the strength and aromatic profile of your dram. Try a sip neat, and then, using a pipette, slowly add water as you want. The difference just a few drops makes can often be surprising. 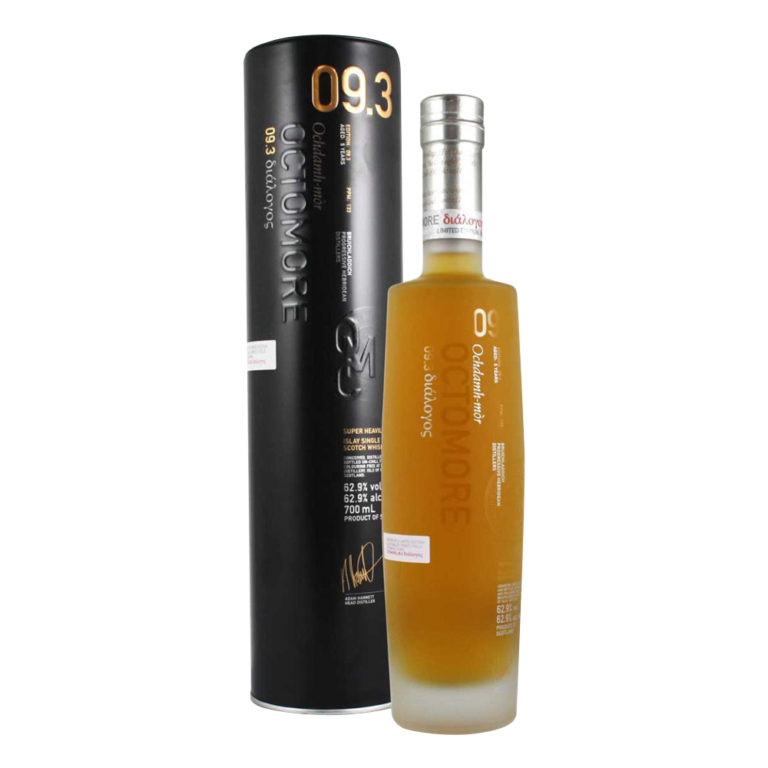 To test this, I took a 20 ml (0.7 oz) measure of Bruichladdich’s Octomore 09.3, five years old and bottled at a heady 63.9% ABV, and tried it with varying amounts of Islay spring water.

As expected, with no water the dram is incredibly boozy, with ethanol overpowering any other aromas that might appear from the glass. To pull out as much flavour as possible from something so strong, it helps to take a small sip, give the whisky a good swirl around your gums and over your tongue, and keep it in your mouth for a few seconds before swallowing. Breathe out through your nose, and once the prickle of the alcohol has died down, you will start to recognise other flavours from the whisky – this is called retronasal olfaction.

With Octomore 09.3, as expected, the most apparent flavour is the peat. Seaweedy, salty, and warming, like a bonfire on the beach. There is a touch of vanilla sweetness hiding in the background and a spicy, almost tannic finish.

After only two drops from a pipette, the whisky changes dramatically. The vanilla becomes far more apparent, with fresh leather on the nose, like the inside of a new car, but with the peat and salinity still prominent. With five drops the peatiness is less pronounced, making way for more vanilla and rich toffee. The dram becomes fruitier, with white stone fruit aromas – perhaps peach or apricot. Ten drops dampens down the vanilla, but makes way for richer, riper fruit.

Take the bottle to a party to share with friends, and everyone involved can have a different experience. New whisky drinkers can cut their dram with good quality spring water to quell the harshness and bring it down to a more palatable strength, and your connoisseur friends have more room to experiment with what works best for them. Cask strength whisky offers something for everyone.