Dailuaine was founded in 1851 by a farmer named William Mackenzie in Scotland's Speyside region. The name Dailuaine means "green valley" in gaelic, a fitting name for the scenic geography of the distillery overlooking the Spey valley.

Single malt bottlings have been increasingly more difficult to obtain under ownership of Diageo. Only a handful of official bottles are released occasionally. In fact, only 2% of distillery production is marketed as single malt. The majority is used for blending in Johnnie Walker.

Those that have the privilege of experiencing Dailuaine in it's single malt form are never disappointed. It's whiskies are very rich and full flavoured with tempting fruity Speyside notes. Each of it's rare releases are enjoyed by both connoisseurs and novices alike. 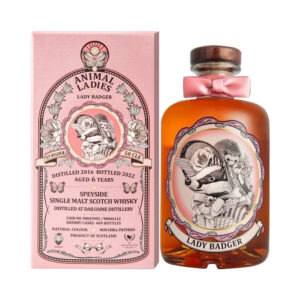 a Lady Badger on the label, making it stand out in any collection, and brings a unique range of fruity and spicy notes to your nose and palate, that work in tandem to deliver a drinking experience to remember. Only 409 bottles of this one were produced.

This stunning single malt whisky from The Rare Malts Selection was distilled at the Dailuaine Distillery in 1973 and matured for a whole 22 years before being bottled at natural cask strength. It brings rich berries, sticky toffee, malt, buttered toast and cinnamon spice, all of which mingle on your nose and palate in real […]